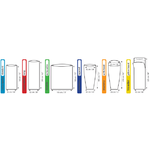 Made from 100% silk these luxurious sleepers are compact, light and comfortable to use. A silk sleeper can be used on its own as an ultralight travel sleeping bag in warm climates or as a liner to a sleeping bag to increase the bags temp range. The added benefit of silk is that it will be warm on cooler evenings and keep you cool when the temperature is higher.

Today the Sea to Summit brand continues to provide innovative gear and serves a growing band of outdoor enthusiasts all over the world.